We’re pleased to announce the following data additions and improvements in Marine Planner.

Submarine Canyons: This previously created map layer outlines the general areas of the Mid-Atlantic’s major canyons. Users can click on any shape for a pop-up containing the canyon name. The layer has been updated to include the following additional canyons (from south to north): Leonard, Phoenix, Warr, South Vries, North and South Heyes, Uchupi and McMaster. The map can be accessed in the Oceanography theme.  Users should note that this is a generalized layer for information and display purposes only – it should not be considered a precise or official delineation of any of the canyons.

Undersea Feature Place Names: This map layer presents text labels containing the names of significant geographic places in the ocean such as canyons, seamounts, banks and shoals. It can be accessed in the Oceanography theme. The data comes from the National Geospatial-Intelligence Agency's (NGA) and the U.S. Board on Geographic Names' (BGN) database of geographic feature names, and the map was first published on MarineCadastre.gov.

Pilot Boarding Areas and Pilot Boarding Stations: The Portal’s Pilot Boarding Areas layer has been replaced with an updated version and a companion layer, Pilot Boarding Stations, has been added. Pilot boarding areas and stations are locations at sea where pilots familiar with local waters board incoming vessels to navigate their passage to a destination port. Because the two are typically viewed in tandem, clicking on either one will automatically activate the other. However, users who wish to view them individually can mute one or the other by using the controls in the Active tab. Both layers were originally published on MarineCadastre.gov, and can be found within the Portal’s Maritime theme. 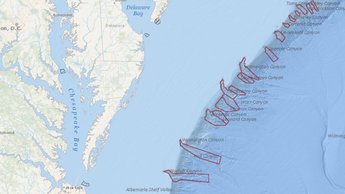