On April 18, the Mid-Atlantic Fisheries Management Council (MAFMC) held a participatory mapping workshop in Baltimore to develop options for their Squid, Mackerel and Butterfish Fishery Management Plan (Amendment 16). MAFMC invited the MARCO Portal Team to help plan the workshop and provide participatory mapping support.  The workshop was open to any interested party and members of MAFMC’s Advisory Panels for Ecosystems and Ocean Planning and the Mackerel, Squid and Butterfish Fishery were encouraged to attend.  Each of these Advisory Panels includes commercial and recreational fishermen and environmental advocates. 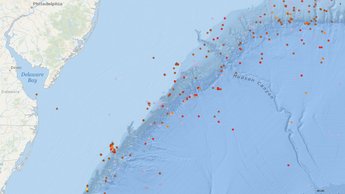 Coldwater coral data in the MARCO Portal. This data was obtained from NOAA’s Deep Sea Coral Research and Technology Program.

During the first half of the workshop an overview of historical and current coral information and data and was presented, including a report on several recent coral research and exploration cruises.  The 2012 ACUMEN and Deepwater Canyons cruises produced an avalanche of new information – high resolution bathymetry, core samples, water quality measurements, video, and still photographs that have not yet been fully organized and summarized.  Highlights from this exciting new research include discovery of what may turn out to be the world’s largest cold seep (methane seep) near Norfolk Canyon, and a major range extension for the reef forming hard coral Lophelia. Exploration and research of the Mid-Atlantic’s submarine canyons is ongoing and will continue through this summer—anyone can follow along by tracking ship movements and viewing live video from ROVs (unmanned submersibles).

During the second half of the workshop, coral research scientists and squid fishermen took turns sharing their detailed knowledge by using the Portal team’s participatory mapping system to enhance and update map data, documenting areas that are particularly important for corals, and for fishing.  Several squid fishermen participated in the workshop discussion, providing a wealth of information about how and where they fish, and where they really don’t want to fish.  Everyone learned that their nets are very expensive and fragile; they are highly motivated to avoid rocky coral habitats that can damage or destroy them.

Following the workshop, several fishermen shared  detailed information regarding areas of coral research interest (hard bottom rugged terrain) with our team.  These coordinates were converted to GIS data and transmitted to scientists aboard the Ronald Brown who have agreed to try to use their ROV to explore these areas during a 28-day cruise of the Norfolk and Baltimore Canyons that commenced on April 30th.

MAFMC is currently scheduling additional meetings with fishermen and the Advisory Panels to build on the information developed at the workshop.  After a range of fishery management alternatives has been finalized, MAFMC is interested in the potential for using the MARCO Portal to enhance the standard public review and comment process this summer.  Everyone involved with the workshop agreed that using interactive online maps to go “beyond pdf” would improve public participation and understanding of the management choices.