The Portal’s collection of Security maps was recently updated based on input from the Department of Defense and other federal agencies. The changes include the consolidation of several maps showing individual military training areas into a smaller set that covers the full Atlantic coast and the Gulf of Mexico, the retirement of select maps, and the addition of new maps designed to aid ocean planning work. 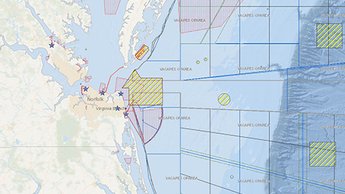 The following data can now be accessed by clicking on the Security theme in Marine Planner:

The maps were published by the National Oceanic and Atmospheric Administration and Bureau of Ocean Energy Management on MarineCadastre.gov in partnership with the Navy.

For more information on the Portal’s Department of Defense data, visit the Data Catalog’s Security section.