Maps showing the areas of federal marine sanctuaries surrounding the wreck of the legendary Civil War ironclad USS Monitor off the coast of North Carolina and a fleet of sunken World War I ships in the Potomac River can now be viewed in Marine Planner.

The Monitor National Marine Sanctuary Boundary layer shows a roughly 1-square-mile area surrounding the final resting place of the Monitor, considered by many to be the most innovative warship design in history. Created by Swedish-American inventor John Ericsson, the solid iron Monitor was nearly impregnable to the enemy fire of its day and was mostly submerged to make it difficult to target. The exception was its signature rotating turret, which peaked out of the sea and could fire on Confederate ships no matter where the ship was positioned.

In March of 1862, Monitor engaged the Confederate ironclad Merrimack for nearly four and a half hours in the Battle of Hampton Roads. The two blasted away at each other at such short range that they sometimes collided, but neither possessed the firepower to sink the other. At that moment, the rest of the world’s wooden navies were rendered obsolete. Merrimack was destroyed by the Confederates weeks later as they abandoned Norfolk, but Monitor continued its service and was replicated by a fleet of Union Monitors. It finally sunk roughly 16 miles off the coast of Cape Hatteras during a December 1862 storm, while serving as part of the Union blockade. 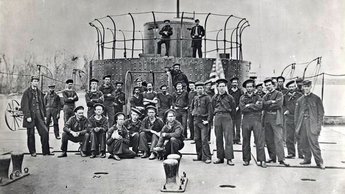 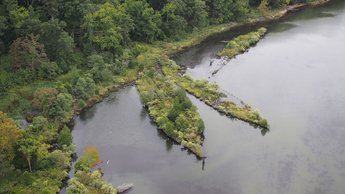 The Mallows Bay-Potomac River National Marine Sanctuary, located 40 miles south of Washington, D.C., was nominated by the state of Maryland in 2014 and designated a part of the network by NOAA in 2019. Located along an 18-square mile stretch of Potomac River coast in Charles County, the sanctuary boasts a collection of historic shipwrecks dating back to the Civil War, as well as archaeological artifacts nearly 12,000 years old.

Mallows Bay is most renowned for its “Ghost Fleet,” the partially submerged remains of more than 100 wooden steamships that were built in response to threats from World War I-era German U-boats that were sinking ships in the Atlantic. Although the ships never saw action during the war, their construction at more than 40 shipyards in 17 states reflected the massive national wartime effort that drove the expansion and economic development of communities and related maritime service industries. The fleet was brought to the Potomac River to be salvaged for scrap metal by a company in Alexandria, Virginia, not far from the sanctuary site.

The Monitor and Mallows Bay-Potomac sanctuaries maps can be found in Marine Planner’s Administrative theme. Data for the maps layers was made available to the Portal by NOAA.