The big wheels keep on turning for the Navesink Queen. After a long run serving passengers in Virginia as a ferry, the old-time paddle wheeler was purchased by Capt. Dan Schade in 2019 and restored for service as a charter vessel in Atlantic Highlands, New Jersey.

Schade’s business name, Classic Boat Rides, is a nod to his passion for vintage vessels. The Navesink Queen is the latest in a line of vessels he’s operated since 2004, when he got started with a wooden 1958 Chris-Craft with room for six passengers. Today, he runs the Mariner, a classic 54-foot Chesapeake Bay deadrise which carries 40, and the double-decker Navesink Queen, which holds 150. 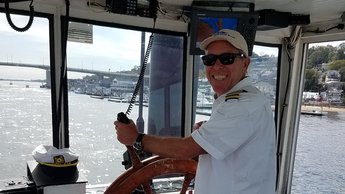 Formerly the Elizabeth River II, the vessel made several runs per day as a member of the Hampton Roads Transit ferry fleet. AIS passenger vessel data from 2018 shows the heavy concentration of traffic along its daily route, which crossed Virginia’s Elizabeth River from Portsmouth to Norfolk.

When the transit agency put her up for bid, Schade (seen at right) jumped at the chance but considered his odds so low that he never went down for an inspection. Six weeks later, he was surprised to learn he won, but wasn’t entirely sure what he was getting.

“I called Hampton Roads Transit and said, I won that boat! Is it running?” he said. “And they said ‘Yes, we’re still using it – we were running it yesterday.’ I said, OK, we’re coming down.” Schade then set sail through the Chesapeake Bay and up the coast for what would add up to a two-day trip to the northern tip of the Jersey Shore. 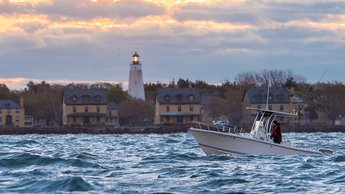 Classic Boat Rides specializes family friendly and corporate activities like scenic sunset cruises, charity events, weddings and burials at sea. Schade notes that the latter must be done 3 miles out, past the Submerged Lands Act Boundary line (seen in map as a dotted line) that separates state and federal waters.

“That law was originally set for all types of ashes, including industrial waste, and human ashes fall in with it,” he said.The majority of his trips are closer to shore though, in the calm waters of the Sandy Hook and Raritan bays, Lower New York Harbor, along northern Monmouth County’s beaches, and within the Navesink-Shrewsbury River Estuary. With its proximity to New York City and forested bluffs overlooking the water, the Navesink River has been the home of denizens such as Bruce Springsteen and Jon Bon Jovi.

“Our mansion tour on Sundays is a narrated tour, so we point out the homes of the rich and famous, local history, the lighthouses,” Schade said. “It’s not a history tour, strictly speaking – it’s a very light-hearted narrative. We don’t let the facts get in the way of a good story.”

The most iconic beacons in the area are the Sandy Hook Lighthouse (seen in the map at the northern top of the peninsula) and the Navesink Twin Lights (overlooking the inlet to Sandy Hook Bay). Built in 1764, Sandy Hook is the longest-operating light in the U.S., having even survived a Continental attack when it was held by the British in 1776. The Twin Lights were built in 1862 upon one of the highest-elevated points along the Eastern Seaboard, which made it an ideal site for Guglielmo Marconi to conduct groundbreaking wireless telegraphy experiments. On that site, he conducted the world’s first wireless coverage of a sporting event for the New York Herald – the 1899 America’s Cup yacht race off Sandy Hook. Today, both lighthouses are favorites for selfie-snapping passengers.

Idyllic scenery aside, the Sandy Hook Bay-Raritan Bay area can be a marine obstacle course, one that requires skill to navigate with large vessels like Schade’s. A look at annual vessel transit for all vessel types shows that it is one of the most congested areas in the Mid-Atlantic.

Among the major traffic sources are round-the-clock commuter ferry trips to and from Manhattan; commercial fishing trips originating from Belford; fishing party boats and charters from Atlantic Highlands, Highlands and other ports; vessels serving Naval Weapons Station Earle; and tanker, tugs and tows headed to refineries and industrial waterfronts in North Jersey and Staten Island.

Capt. Schade said it is a common occurrence for him to maneuver his large vessels out of the way of careless joy riders who cut him off. It requires him to watch the waters carefully at all times and anticipate what others are going to do next.

“From the Fourth of July through the end of August, if the weatherman says, ‘It’s going to be sunny this weekend,’ hold on to your mint juleps,” Schade said. “I’ve had people with 40-foot speed boats pass 10 feet away from us at 20 or 30 knots, leaving a wake. Some people, the lessons they learned in their safe boating class don’t seem to click in.” 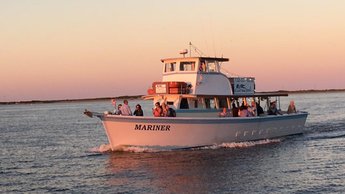 Another indicator of the area’s popularity for recreation comes via the map above, showing the results of a series of public participatory GIS workshops conducted by MARCO. Participants were asked to mark areas on a map that they used for any of over 20 recreational activities, ranging from kayaking to wildlife viewing. Capt. Schade’s typical routes around Sandy Hook and the Two Rivers area are covered in dark browns, representing the highest possible number of uses.

Traffic challenges aside, after a year of sailing, the Queen is reigning just fine over her waters. Schade made news in April when he led a parade of charter and party boats to raise awareness of an industry grounded by COVID-19. The vessels returned to the water soon after with reduced capacities and social distancing measures in place.

“Things are going as best they can with the COVID problems,” he said. “We are running both boats right now and focusing mainly on private charters where friends and family can gather in an open-air setting and enjoy a day on the water.”