The commercial fishing industry has been woven into the Mid-Atlantic region’s cultural fabric and economy for over 300 years. Today it generates a half-billion dollars in landings revenues annually, with sea scallops, blue crabs, ocean quahog clams and squid among the region’s prized fisheries and signature culinary delights. In addition, for-hire fishing boats in ports like Montauk, New York, and Brielle, New Jersey – once dubbed “the sport fishing capital of the world” – support thousands of jobs and create lifelong memories for tourists enjoying summer day trips angling for fluke, striped bass and bluefish. 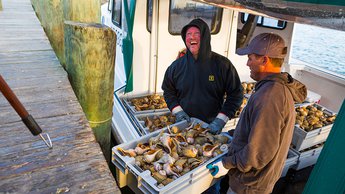 The Portal houses over 1,000 map layers illustrating commercial fishing along the East Coast. The Mid-Atlantic Regional Council on the Ocean (MARCO) has added much of this data in consultation with industry members, who have helped make the Portal’s maps more accurate, timely and informative for ocean management deliberations.

In this edition of Ocean Stories, we provide a tour of some of the most important and frequently consulted fishing data products available on the site. All maps should be interpreted with a deep understanding of the fishery and should serve as a starting point for additional research and insight from the industry and fishery managers. Visit the Using the Portal page for helpful tutorials on the Portal and its tools.

The federal vessel monitoring system (VMS) is used by the National Oceanic and Atmospheric Administration’s (NOAA) enforcement program to electronically monitor the location and movement of commercial fishing vessels. Certain vessels are required to carry transponders that signal their position to satellites, helping the agency enforce compliance with regional fisheries management. The data produced has also been used to create insightful maps showing fishing activity from the Gulf of Maine to Cape Hatteras.

The Portal’s VMS maps were created by averaging this locational data to show where vessels spent the most time in windows of between two and five years. The maps categorize vessels by catch type, with maps available for the herring, monkfish, multispecies (groundfish), pelagic fish, scallop, squid, surfclam and ocean quahog fisheries. Additional maps show the density from 2015 through 2019 of all VMS fishing and activity by VMS-carrying vessels that were declared “out of fishery.” The latter can cover a range of activity that doesn’t involve fishing for species that require VMS monitoring, such as trips to retrieve lost gear, recreational charter fishing, scientific research, or commercial fishing for species that aren’t subject to VMS declaration.

The map colors run from reds that indicate where the highest levels of vessel activity was found to cool blues that indicate low activity. For some year ranges, users can choose whether to view maps showing all vessel travel in a given period or only low-speed travel. The Squid 2015-2016 map above presents a full view of where all vessel traffic, including high-speed transit to fishing grounds, took place.

Now view the data from the same time window, but only for travel under 4 knots. The lower-speed maps filter out the areas where the vessels were in transit and show only where fishing activity likely took place.

The Portal’s vessel trip report (VTR) maps present a view of many of the most important areas for commercial fishing by gear type. While the VMS maps show where fishing vessel activity took place for certain federally managed fisheries like groundfish, the VTR maps instead show areas where there were fishing trips in federal waters using gear such as bottom trawl, dredge, gillnet, longline, and pots and traps. There are four maps for each gear type covering five-year time windows from 1995-2015.

Most federally permitted commercial fishing vessels are required to submit VTRs for each fishing trip containing information such as the date, number of crew on board, species and quantities caught, and where they fished.

The VTR maps are also referred to as “Communities at Sea” because they can show which ports relied on any given area of the ocean. Users can click any point on the map for a pop-up revealing which communities fished in that area.

Upon turning on a VTR map – for example Gillnet 2011-2015 (seen above) -- a companion layer will automatically activate listing where vessels of that gear type came from during that period. Upon clicking a port like Barnegat, New Jersey, you can learn that it accounted for 6,807 vessel trips, which represented 9.8% of the regional total, and 13,507 total fisherdays, or 6.8% of the regional total.

The Portal’s Fishing – Communities at Sea (by Port) theme is based on the same VTR data. These maps break down the regional VTR fishing maps to show only the zones used by fishers from specific ports.

After clicking the “Gillnet” dropdown, users can type in the name of any port, such as Barnegat, New Jersey, to see where 90% of its fishing effort took place. By overlaying this map with the Gillnet 2011-2015 map, you can see where Barnegat vessels spent their time relative to all others in the region. 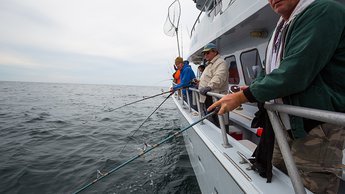 VTR data was also used to create four maps showing party and charter boat fishing in the 1996-2000, 2001-2005, 2006-10, and 2011-2015 timeframes. They can be accessed by clicking on the “Recreational Fishing” dropdown in the Fishing theme. Like the commercial fishing VTR maps, users can click on any point of the map for a pop-up disclosing which ports fished in the area.

A companion layer showing the home ports for federally permitted vessels will automatically activate when you select one of the recreational fishing maps. Users can click on a port to learn how many total trips, trips as percentage of the regional total, total fisherdays, and fisherdays as percentage of regional total were recorded for that location.

The map only represents party and charter boats that are permitted to fish in federal waters (beyond 3 miles from shore). Many more recreational fishing vessels operate out of ports along the Mid-Atlantic coast but remain closer to shore and therefore aren’t required to possess federal permits or submit VTRs.

The Portal houses dozens of maps delineating fisheries management areas and closures. Many of these were added in 2021 based on feedback received from fisheries managers and industry members as part of a collaborative project conducted by MARCO, the Northeast Regional Ocean Council (NROC) and Responsible Offshore Development Alliance (RODA) through NOAA Regional Ocean Data Sharing Initiative.

The Management Areas organizational scheme in the Portal’s Fishing theme mirrors that used by the NOAA Fisheries New England/Mid-Atlantic GIS page. Data is grouped in a series of dropdowns based on fishery management plans such as Northeast Multispecies (Groundfish) and Atlantic Sea Scallop.

The “Expired Management Areas” dropdown contains layers for management or closure areas that are no longer being applied within current fisheries management regulations. Industry members in particular felt that these layers were important to display to give context to other maps and data on the Portal that depict fishing activity. Patterns of fishing vessel activity in any given year are the product of multiple factors including the currently managed or closed areas. By overlaying fishing vessel activity data organized by year(s) with the management or closure areas in place for those year(s), users can better understand drivers of fishing activity and explanations for year-to-year changes.

The “Management Areas: Other” dropdown contains the Carl N. Shuster Jr. Horseshoe Crab Reserve (shown above), which was added at the request of fishing industry members. Enacted in 2001 and named in honor of an American horseshoe crab scientist and conservationist, the zone extends roughly from Atlantic City, New Jersey, to Ocean City, Maryland, and is off-limits to fishing for horseshoe crabs, which can be used as bait for American eel, whelk, catfish and others.

Finally, the Portal contains annual and monthly maps based on Automatic Identification System (AIS) data that reveal fishing vessel traffic patterns. Since 2002, large vessels operating in U.S. waters have been required to carry AIS transponders, which send automated signals to nearby ships, onshore infrastructure and satellites indicating their identity, purpose, course and speed. Originally envisioned as a post-9/11 security measure, AIS data is now used by the public and private sectors for a far wider range of uses, including maritime safety, ocean planning and environmental protection.

The Portal’s Maritime theme contains AIS maps for fishing vessels for each year dating back to 2015. The maps present a composite of traffic for fishing vessels that provided locations via AIS, rather than breaking out ships by fishery or gear type, as the VMS and VTR do. Since AIS is not required for many fishing vessels, this dataset should only be used to supplement other fisheries data and users should understand its limitations when interpreting these maps.

Additional Data of Importance to Fishing 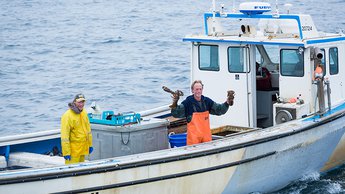 The Portal contains a trove of data that, while not directly depicting fishing activity or management zones, is of direct relevance to the industry. These include:

Members of the Portal’s development team periodically conduct trainings with industry representatives, who have offered valuable insights on ways to make the site easier to use and data additions that can assist with their work.

MARCO continues to improve its fishing maps to meet the needs of all Portal users. Each year, an Ocean Mapping and Data Team (OMDT) made up of consultants and state, federal, and tribal entities drafts a work plan that guides the map data and tool enhancement priorities for the coming year and beyond.

Many of the data additions and updates called for in the latest work plan arose from discussions in collaboration with MARCO, NROC, fishery managers, RODA and other fishing industry members through the previously discussed NOAA-supported project (click here to view the final report). The recommendations include:

● Exploring options to reorganize the Fishing theme so the maps are grouped by fishery rather than data type (e.g. management areas, VTR, VMS).

● Consult with NOAA, fishery management councils and others to ensure management areas layers are up to date and replace/retire maps as needed.

● Draft Communities at Sea maps showing shrimp fishing reported via VTRs in the Mid-Atlantic and Northeast.

We offer the suggestions below for those seeking more information and data relevant to fishing in the Mid-Atlantic may consult the online sources. For additional online sources, visit the Portal’s Resources & Data Links section.