Coming in 2016: A Regional Ocean Plan and More Powerful Portal

The coming year will see several major improvements to the Portal along with the adoption of a first-ever Ocean Action Plan (OAP) for the Mid-Atlantic region.

An important milestone for both projects was reached in September when government officials, Tribal representatives, industry leaders, members of the public and other stakeholders gathered in Norfolk, Virginia, for a series of meetings focused on ocean issues in the five-state region – New York, New Jersey, Delaware, Maryland and Virginia. Expert panelists provided updates on a group of research and data-gathering projects currently underway that will boost the Portal’s capabilities and ultimately help inform the ocean plan.

The meetings drew attendees from the Mid-Atlantic and beyond, some of whom came to learn more about the Portal. One of those was Tampa Bay’s Bryan Schoonard, who hopes to develop a similar site as part of his work with the Gulf of Mexico Fishery Management Council.

“The information you’re providing for your customers is excellent, because it’s not overwhelming,” Schoonard said of the Portal. “A customer can very easily use [the Portal], get to where they need to go, and get the information they need quickly.”

Why an Ocean Action Plan?

The movement toward regional ocean planning stems from the recognition that management of fish populations in Virginia can impact Maryland; that damage caused to port infrastructure by sea level rise in New York can carry ramifications in New Jersey; that marine animals don’t know where the borders of one state ends and another begins. The ocean tightly binds the cultures and economies of all the Mid-Atlantic states, making coordination between them a necessity to effectively protect this critical resource.

In 2010, President Obama issued an executive order establishing the National Policy for the Stewardship of the Ocean, Coasts and Great Lakes. This National Ocean Policy, or NOP, called for greater collaboration among states and regional authorities on marine issues and supported the formation of regional planning bodies to develop ocean plans for their respective territories by the end of 2016.

The Mid-Atlantic Regional Planning Body (MidA RPB) is one of eight such groups nationally to have been established for this purpose. Since 2013, the MidA RPB has conducted several public listening sessions, tribal outreach and in person meetings – the most recent in Norfolk – to gather input on issues people consider the most pressing to them.

The MidA RPB is now guiding the development of a draft plan, which is scheduled for release and public comment by June of 2016. A revised draft incorporating the public comments will be submitted to the National Ocean Council for review and concurrence in the fall. 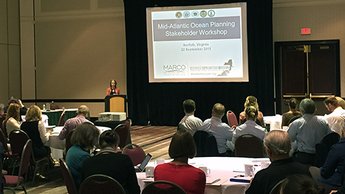 Three new data products under development will help provide the scientific foundation for any strategies and recommendations outlined in the plan: a comprehensive study of marine life in the Mid-Atlantic, a study of human activities in the region and a Regional Ocean Assessment report. Elements of the projects will be incorporated throughout the Portal site and its Marine Planner mapping tool.

A Marine-Life Data and Analysis Team (MDAT) led by researchers from the Duke University Geospatial Ecology Lab has aggregated a virtual trove of data related to marine life populations, distribution and trends in the Mid-Atlantic. According to MDAT project team member Patrick Halpin, the data could potentially be used to create over 3,000 layers on the Portal, including 740 dedicated to marine mammals alone.

Because so many options would be unwieldy, the team is developing a more manageable group of classifications that can present the data in logical ways. Rather than thousands of layers dedicated to individual species, umbrella terms like “forage fish” could be used to cover butterfish and multiple others, while hot spots can be indicated on some layers to note the most ecologically diverse areas. Work on this product is expected to conclude in the spring.

A team of experts developing the Mid-Atlantic Regional Human Use Spatial Data Synthesis (HUDS) is gathering information that will help depict the many places and ways – economic, social and cultural -- that people interact with the ocean. The project will culminate in the creation of a series of new Marine Planner layers, fact sheets and a final report.

The team inventoried existing human use data on the Portal and focused on filling any gaps in the information, according to Melanie Schroeder Gearon of the consulting firm RPS ASA. Some of the layers on the Portal will be replaced with more current data, she said.

Finally, a third team is conducting a Regional Ocean Assessment (ROA) focused on the steps necessary to ensure healthy ocean ecosystems and sustainable ocean uses in the future. The group is analyzing a wide cross-section of existing data – including information used in the MDAT, HUDS and Portal -- to identify important past and future trends that should be considered in the ocean planning process.

The ROA will apply the best scientific data available to these trends in order to assess how factors such as sea level rise and human activities may determine the vulnerability or resilience of our coastline. It will also highlight knowledge gaps that should be addressed through future ocean research efforts.

Like the Portal, the ROA will have a stand-alone website that has a similar look and feel as the main MARCO site (midatlanticocean.org). It will feature a mix of narrative reports and multimedia elements, as well as data that will be incorporated in the Portal.

The upcoming months will be instrumental in the development of these data products and the Mid-Atlantic Ocean Action Plan.  Check the MARCO website frequently or follow MARCO on Facebook or Twitter to stay up to date on opportunities to get involved in the process. Those interested can also contact MARCO at info@midatlanticocean.org at any time to share their thoughts on these or any other ocean issues. 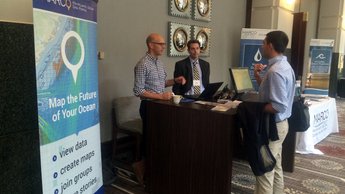