The highly migratory species layer presents a color-coded map indicating areas where 42 types of fish such as sharks, tuna and swordfish are known to live and migrate. Users can click on any point in the map for a number and list of species that may be found in the area. The data can be accessed by clicking on the Marine Life tab in Marine Planner.

The Automatic Identification System (AIS) layers depict traffic concentrations for cargo, passenger, tanker and tug/tow vessels in 2013. AIS data is real-time information collected by the Coast Guard to track route patterns, ship purposes and speeds to aid in ocean planning work. These and other AIS layers from 2011 and 2012 can be found in Marine Planner by clicking on the Maritime tab. 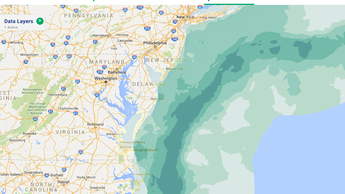