On April 12, the U.S. Coast Guard (USCG) posted a supplemental notice of study to seek additional information related to the notice of study that was published on June 29, 2020, regarding the Northern New York Bight Port Access Route Study (NNYBPARS). Following a review of the comments and materials received, the USCG identified several areas of additional inquiry related to the study. The USCG invites comments and responses to the proposed questions and information requests. Comments close May 12, 2021.

To view the NNYBPARS area in Marine Planner, activate the Port Access Route Studies (PARS) Areas layer, which can be found by clicking on the USCG Proposed Areas and Studies dropdown in the Maritime theme.

The Coast Guard is conducting the Northern New York Bight PARS to evaluate the adequacy of existing vessel routing measures and determine whether additional ones are necessary for the approaches to the Port of New York and New Jersey and international and domestic transit areas in the vicinity. The PARS will consider factors such as planned or potential offshore development, current port capabilities and anticipated improvements, increased vessel traffic, existing and potential anchorage areas, changing vessel traffic patterns, effects of weather and navigational difficulty.

Vessel routing measures, which include traffic separation schemes, two-way routes, recommended tracks, deep-water routes, precautionary areas and areas to be avoided, are implemented to reduce the risk of marine casualties. The recommendations of the study may subsequently be implemented through rulemakings or in accordance with international agreements. 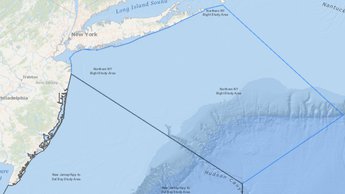