Portal users can view the boundaries of nearly a dozen new and expanded artificial reef areas proposed and currently under evaluation by the State of New York.

The Artificial Reefs: New York Proposed Expansions and New Sites map layer is available in the Portal’s Fishing theme. It was created at the request of commercial fishing stakeholders through a collaboration of the Portal Team and the New York State Department of Environmental Conservation (NYSDEC), which manages the 12 artificial reefs off the state’s coast.

The new layer illustrates the proposed expansion areas with red-dotted lines and the new reef sites with black-dotted lines. Users can also activate the Portal’s Artificial Reefs layer to view existing reef areas (shown in solid blue lines) throughout the Mid-Atlantic. Click here to view this map in combination with the New York-proposed areas. Users can click the reef areas on the map for pop-ups containing their names.

Composed of objects such as decommissioned ships and sunken rail cars, the region’s artificial reefs serve as underwater cities where marine organisms aggregate and thrive. With encrusting organisms growing on the wrecks and fish teeming around them, the sites are major attractions for recreational and commercial fishers and SCUBA divers. The Artificial Reefs map polygons represent zones where materials may be deposited; areas are not necessarily filled within the reefs. 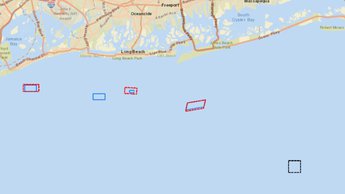