In the spring of 2018, BOEM published a Call for Information and Nominations from companies interested in commercial wind energy leases within four areas off the New York and New Jersey coasts. After reviewing the comments received in response to the Call for Information and Nominations, comments received during stakeholder meetings and general feedback, BOEM has delineated draft Wind Energy Areas in the New York Bight.

The Draft Wind Energy Areas are depicted in two colors, dark green and light green. The dark green areas are BOEM’s primary recommendations, areas that relative to others with in the Call Areas were determined to present the least amount of conflict with a potential offshore wind facility. Areas in light green are secondary recommendations, which are slightly more conflicted than the dark green areas, and are where BOEM welcomes additional stakeholder perspectives. 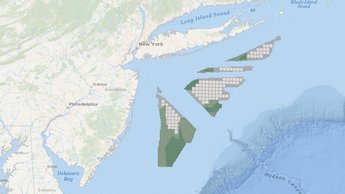