Three new maps showing the approximate routes of telecommunications and power lines and submerged oil and gas pipelines in the Mid-Atlantic have been added to Marine Planner. For the convenience of users, these layers have been grouped together under a new “Submarine Cables and Pipelines” dropdown in the Maritime theme.

The new maps layers are:

The Submarine Cables and Pipelines dropdown also includes a previously published NASCA Submarine Telecom Cables map. This data layer shows the locations of in-service and out-of-service cables in U.S. territorial waters that were owned by members of the North American Submarine Cable Association as of 2015. Learn more in our Ocean Stories profile of NASCA and the submarine cable industry.

Additional routes will be included in the Recent Cables layer as data becomes available. The Portal Team thanks Subcom and Seaborn Networks for their assistance in creating the map. 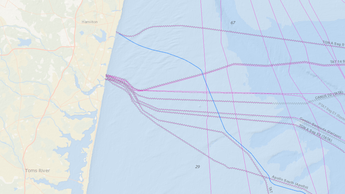