In the days following the Sept. 11 attacks, America’s law enforcement and security agencies worked tirelessly on a top-to-bottom probe of the nation’s vulnerabilities. George “Guy” Thomas, then a Johns Hopkins University professor working with the U.S. Naval War College in Newport, Rhode Island, was tasked to research how to harden the country’s ports against the threat of maritime terrorism.

Thomas got wind of a technology the Coast Guard was using to track ships coming in and out of the harbors and decided to attend a demonstration. The system allowed ships to accurately signal information about their course, speed, destination and more to other vessels and transponders on shore from relatively short range. Watching on, Thomas came up with an idea that would amount to one giant leap for the maritime industry – putting the technology in space.

George "Guy" Thomas predicts how AIS technology will evolve in the future.

By mounting a receiver on a satellite, the same types of signals would allow vessel movements to be tracked from anywhere on earth and the information could be shared in real time. So was born the technology known as the Satellite Automatic Identification System, or S-AIS.

“The thing that was most memorable was how much pushback I got that I was talking about something that was technically impossible. And then when we proved it, that it was technically feasible, [people said], ‘Oh yeah, that’s obvious!’” Thomas recalled with a laugh. “No, it wasn’t obvious by any stretch of the imagination.”

The growth of satellite AIS technology has somewhat mirrored that of the Internet itself. Initially created for security purposes, its use expanded exponentially once the private sector got its hands on it. Now satellite AIS is used for maritime safety, ocean planning, environmental protection, fishing enforcement and even apprehending pirates. 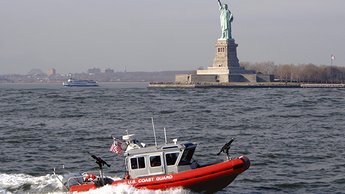 The Portal currently carries hundreds of layers of non-satellite derived AIS data collected by the U.S. Coast Guard and processed into maps for the offshore energy and marine planning communities by the MarineCadastre.gov team, a joint Bureau of Ocean Energy Management (BOEM) and National Oceanic and Atmospheric Administration (NOAA) effort. The data includes annual and monthly maps for categories related to cargo ships, tankers, passenger ships, tugboats and tow vessels from 2011 through 2017. The 2018 through 2020 data also includes categories for fishing vessels, pleasure craft/sailing vessels and "other" large vessels that don't fit any of these classifications. The Portal Team plans to add future years as the data becomes available.

When analyzed over long time periods, AIS data can show trends and distribution of vessel traffic density, compliance with route and speed recommendations, and relative use patterns by vessel type, as well as function as a tool to model ocean noise and help determine potential location-based conflicts or alternatives when planning the construction of offshore structures and conducting dredge operations.

Reds, oranges and yellows show where annual vessel concentrations were the highest, while cooler colors note where traffic was lightest. The map above shows a combination of three of the Portal’s AIS layers. Taken together, they present a clear picture of where the most heavily trafficked shipping lanes in the East Coast are. 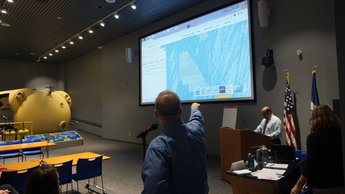 Doug Simpson, a recreational boating safety specialist with the U.S. Coast Guard’s 5th District in Portsmouth, Virginia, said the Portal and its AIS map layers have been useful for helping people who don’t have experience with complicated GIS mapping technologies to visualize marine planning issues.

“It’s easy for me to direct people to the MARCO Portal, guide them through, open up certain overlays – for example, AIS data and wind energy area data – and it quickly gives them a picture of, ‘Hey, here’s where shipping is, here’s where new industry can be,’ and lets them draw the conclusions themselves. What does it mean for shipping? What does it mean for wind energy? So it’s a quick, easy to use tool, and I appreciate that it’s out there,” Simpson said. 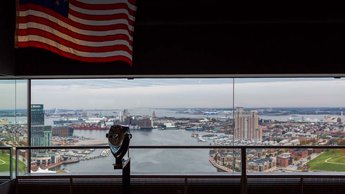 Although Thomas’ idea was hatched less than a month after the 9/11 attacks, it did not become a reality overnight. Launching a satellite is not cheap, and funders were originally skeptical. But three years later, the Coast Guard provided the financial support to launch the world’s first six AIS satellites.

“People kept telling me I was crazy. It wouldn’t work, or it wasn’t their job, but I persevered,” said Thomas, now the president of Baltimore-based C-SIGMA Ltd.

Today it is mandatory for most large vessels in U.S. waters to use AIS transponders (see this Ocean Stories feature for more details). Thomas recalled that many operators initially resisted the technology, citing concerns over privacy. But now, ships are sharing far more information through AIS than ever before – everything from pictures of the vessels, to bios of captains, to details about what kind of freight is on board and who owns it.

“All of that information together gives you a much better idea of what’s happening on the world’s oceans today,” Thomas said. “They are transparent -- they are no longer opaque."