Survey Shows Where Boaters Go and How They Spend Time, Money

It was an expensive day of fishing for Mike Sabolewski. Things started off well enough – on the way to his boat slip in Belmar, N.J., he plunked down $20 for bait, $15 for ice and $12 for beverages.

Mike Sabolewski discusses the costs of maintaining a boat, including an expensive recent repair.

He navigated his 19-foot Pursuit, the Tanner James, out of the Shark River Inlet and headed a few miles north, just offshore of Long Branch. That’s when he heard “a pop and a lot of metal.” Sabolewski steered the boat back at a crawl’s pace before the engine died in the river. He contacted Sea Tow, a sort of AAA for boaters (and at $140 per year for unlimited tows, he said, “well worth it”), for help getting back to the marina.

The total cost of replacing the motor: $15,000. It was nearly double what he paid when he bought the boat used eight years earlier.

Sabolewski can at least take some solace in knowing that, statistically speaking, he’s due for an easier season of spending ahead. That’s because a survey of Mid-Atlantic saltwater boaters found that the average annual cost of owning and maintaining a vessel runs about $7,722.

The survey, which was conducted by the Mid-Atlantic Regional Council on the Ocean (MARCO) and the Monmouth University Urban Coast Institute, queried the owners of vessels 10 feet or longer that were used primarily on saltwater in Delaware, Maryland, New Jersey and Virginia. It was modeled closely after one conducted a year earlier by New York and five New England states.

Among the Mid-Atlantic survey’s findings, boat owners and their parties pumped an average of $318 into the economy with each on-water trip. The largest expenses were maintenance/equipment/repairs ($86), fuel/oil ($78) and food/drinks ($50). Owners spent another $727 during trips to their vessels that didn't involve going on the water. In the Northeast, the survey concluded that boaters accounted for roughly $2 billion in spending -- $852 million by New Yorkers alone.

In addition to answering questions about spending and trip activities, participants in both surveys used an online program to digitally map their trip routes and activities. The data they provided is available for viewing on the Portal, as seen in the map above.

A quick glance at the routes mapped by participants reveals that with the exception of a few adventurous trips to the deep sea canyons, boaters tended to stay pretty close to home. These results ring true to Mike Danko, a recreational boating and marinas expert with the New Jersey Sea Grant Consortium in Sandy Hook. According to Danko, most saltwater boating trips are confined to within 3 miles of shore.

Sabolewski said he never ventures out further than 8 miles and usually stays within 6.

“When I’m with the kids, I do a lot of swimming, tubing and and fishing, but usually in the river,” Sabolewski said. “When I go out on my own or with friends, I’m usually on the ocean fishing. 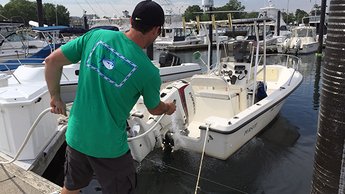 Owners in the Mid-Atlantic took their boats on the water about 4.7 times per month. For his part, Sabolewski usually takes about two on-water trips per week and perhaps as many as five if he’s on vacation. He’s hooked and so is his young son, but that swims against the current of a national trend.

According to Danko, the popularity of recreational boating has plateaued in recent years along generational lines. Owners in their late 50s, 60s and 70s are now getting out of their boats and they’re not being replaced at the same pace by younger boaters.

“One of the reasons is that the kids graduating college today are making good money, but they have huge debt,” Danko said. “They don’t have the money for a boat because they’re paying off student loans or trying to buy a house.”

Danko said that marine trades organizations across the country are working to implement programs that attract younger boaters and lure former enthusiasts back. Whether they’ll prove effective remains to be seen.

"Sales at the boat shows have been strong and hopefully we start to see an increase boat registration," Danko said.

Final reports for the recreational boating surveys are available for download. Click here (PDF, 5 MB) for the Mid-Atlantic report and here for the Northeast report.