In partnership with the U.S. Fish & Wildlife Service (USFWS) and the Bureau of Ocean Energy Management (BOEM), nine new map layers showing the core use areas of three diving bird species – the northern gannet, red-throated loon, and surf scoter – during spring migration, fall migration and winter, have been published on the Portal. The maps can be found by clicking on the Bird Seasonal Migration and Utilization Distribution dropdown in the Portal’s Marine Life theme. 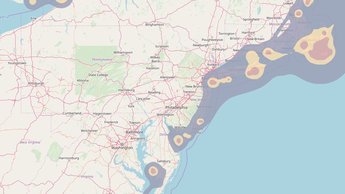 These new layers represent some of the results of a study to determine fine-scale use and movement patterns over the course of five years (2012-16) for the three species in federal waters of the Mid-Atlantic. To accomplish the study, scientists fitted over 400 birds with a device that tracked movements over a period of time. These species are each found in relatively large numbers and represent a cross-section of marine birds within Mid-Atlantic waters during this time period. The birds are all considered species of conservation concern and also exhibit traits that may make them vulnerable to the adverse effects of offshore wind development. For more detailed information about the study, read the report to the BOEM Environmental Studies Program.

The new data products and their underlying data differ from other marine life data available on the Portal. Results provide different, but often complementary, information on distribution and movement patterns. Movement data generally provide finer-scale spatial and temporal information that enable correlations to be made between locations and habitat use, and provide insights on migratory routes timing and key use areas (foraging, resting, breeding). They are also not bound to a particular survey area, but are derived from all locations used by tagged individuals. Survey-derived, predictive abundance and distribution models produced by the Marine Life Data and Analysis Team (MDAT) represent a broader portion of a population often over a broader time period for a particular survey area (or set of survey areas). Users are urged to interpret data product outputs with these differences in mind.

MDAT bird models do not cover Long Island Sound, Delaware Bay, Chesapeake Bay, and other nearshore or estuarine areas, which were found to be heavily utilized by the three species in this study. In general, however, there is agreement between the results of this tracking study and the MDAT models in the distributions of all three species in winter.

The Northeast Ocean Data Portal, in coordination with the US Fish and Wildlife Service, held an expert webinar about the maps on Jan. 10, 2020. You can view the video below.