An anchorage area first proposed by the Coast Guard in 2020 to accommodate vessels near the approaches of the Cape Fear River in North Carolina has been amended and can now be viewed on the Portal.

The USCG Proposed Anchorage Ground: Cape Fear River Approach, North Carolina map layer can be found by clicking on the “USCG Proposed Areas and Studies” dropdown in the Portal’s Maritime theme. The Coast Guard invites members of the public to comment on this supplemental proposed rulemaking by April 25, 2022. Full details, including supporting documents and instructions for commenting, can be found on the Federal Register.

In 2020, the Coast Guard published a notice of inquiry in the Federal Register to solicit public comments on whether it should initiate a rulemaking to establish an anchorage ground near the approaches to the Cape Fear River and to increase the size and relocate the existing Lockwood’s Folly Inlet explosives anchorage. After receiving supportive comments, the Coast Guard published a 2021 notice of proposed rulemaking (NPRM) in the Federal Register stating why it was issued and inviting comments on the proposed anchorage.

In the updated map, the Coast Guard moved the western boundary and coordinates of the proposed anchorage for vessels carrying explosives 1,000 yards eastward to avoid a conflict with a North Carolina Division of Marine Fisheries Artificial Reef. The remainder of the proposed rule remains unchanged. The Coast Guard is now issuing a supplemental notice of proposed rulemaking (SNPRM) to solicit comments on changes made to the NPRM.

Although North Carolina is not one of the five Mid-Atlantic Regional Council on the Ocean (MARCO) states, several Portal map products cover the state’s coast due to the strong maritime trade and travel relationships between them. For example, the Portal’s Port Access Route Study (PARS) Areas map includes the Cape Fear Study Area extending from Cape Hatteras into South Carolina, and its collection of monthly and annual AIS vessel transit maps covers the full North Carolina coast. 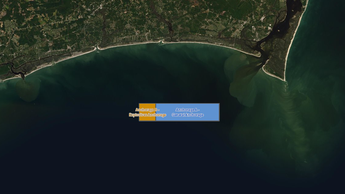